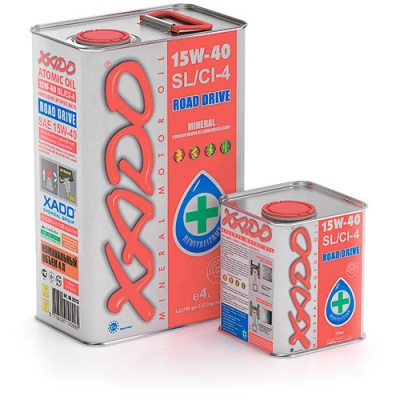 XADO Atomic Oil 15W-40 SL/CI-4 not only meets all the performance requirements for mineral oils but it also exceeds many synthetic oils!

Compression, power, economy of the engine will be always kept in top condition due to the patented formula of Atomic Revitalizant included into XADO Atomic Oil.

Application of revitalizants is considered as a prospective direction in the area of energy and resource-savings and is confirmed by certification tests in 35 countries of the world.

XADO Atomic Oil 15W-40 SL/CI-4 exceeds the requirements of the highest American and European specifications for motor oils for passenger cars and trucks.

The base oil for XADO Atomic Oil 15W-40 SL/CI-4 is produced from high quality hydrocarbons from the oil from the shelf oilfield of the North Sea.

Your opinion is important to us: